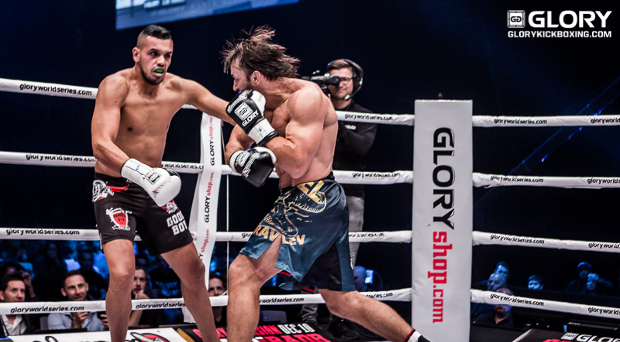 Pavel Zhuravlev debuted at GLORY 32 VIRGINIA in the Light-Heavyweight Contender Tournament and came in as the favorite to win it. His record includes wins over top names such as Gokhan Saki and Benjamin Adegbuyi and he is a concussive puncher.

It was ironic then that he was eliminated in the semi-final stage after a fight which did little to showcase what he is best at. Late entrant Ariel Machado played the ideal game to counter Zhuravlev's style, fighting backwards and catching him with kicks at range to win a decision.

Hameur-Lain, unheralded going into that tournament, ended up winning it. First he stopped Warren Thompson with one of the most crushing knockouts ever seen in the GLORY ring, then he stopped Machado in the tournament final by breaking him down with kicks to the legs and body.

Hameur-Lain wanted to fight on the GLORY 35 NICE card because it was taking place in France and GLORY matchmaker Cor Hemmers felt like it would be interesting to see him face Zhuravlev because “then every fighter from the Virginia tournament has faced each other”.

This time it was Hameur-Lain who came in as the favorite, thanks to his tournament run and being on home soil. Zhuravlev had other ideas. Hameur-Lain did not play the game Machado did; he set out to take Zhuravlev on and beat him soundly. It was an erroneous strategy, because Zhuravlev is one of the best in the world at what he does.

Huge leg kicks from the hulking Zhuravlev set the tone, followed by crushing hooks and overhand rights. He's not a fighter who likes to play around behind a jab. Hameur-Lain gave back as good as he got initially but was soon overwhelmed, Zhuravlev's forward-pressure and intensity too much to be denied.

The first knockdown happened in a neutral corner after Hameur-Lain was herded onto the ropes and battered into it. An overhand right made him lean forwards drunkenly and hit the canvas. He regained his feet and beat the referee's count only to go straight back into a tornado of Zhuravlev firepower.

Blow after blow came crashing into him. At first he defended well and it looked like Zhuravlev's advantage may pass without him capitalizing. But where most fighters would have eased off to conserve energy, Zhuravlev simply continued hammering away. Eventually a shot got through, followed by another and then another. Hameur-Lain was forced to sit down on the middle rope and the referee had seen enough, waving the fight off.

Zhuravlev celebrated his win by doing push-ups and crunches in the middle of the ring. That's the kind of guy he is. Expect to see more high-energy action from Zhuravlev in the near future. The rest of the light-Heavyweight division was put on notice tonight.