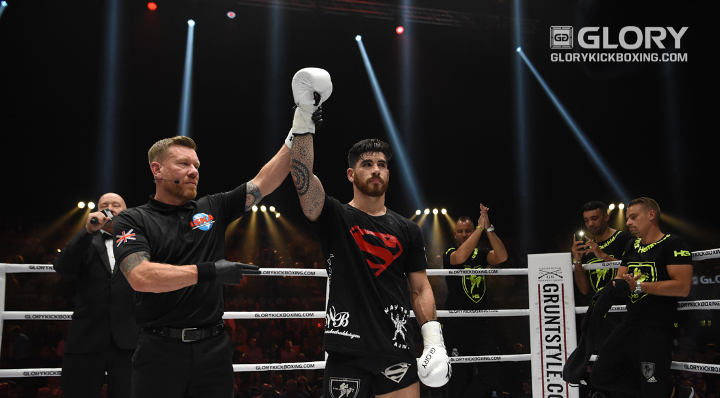 Alan "Superboy" Scheinson (51-6, 37 KO’s) travels to New York for GLORY 55 with a showdown looming against former Welterweight champion Cédric "The Best" Doumbé (69-6-1, 40 KO’s).
It’s a huge fight for the Argentinian - if he wins, he elevates himself considerably in the rankings and might even be able to wedge his name into the title conversation.
Doumbé is the Welterweight division’s clown prince, notorious for winding opponents into a rage by way of trickery and showboating. His baiting of former champion Nieky Holzken was a masterclass in mental warfare and resulted in the belt changing hands.
“I like Cedric, he’s a cool guy and he makes me laugh with his things. The stuff he does just amuses me, it’s funny, so he can’t get in my head with it,” says Scheinson.
“He’s already put some stuff on Instagram and I really did laugh when I saw it, it’s funny.”
Social media is where the war starts for Doumbé, usually as soon as a fight is announced. But for Scheinson it’s all an irrelevance; his mind is purely on the ring, where Doumbé has proven a tricky customer.
“This guy… you shouldn’t let him play his game. He wants to trick you, annoy you, get into your head. This is why guys have been losing to him - he gets in their head and they get all mad and want to hit him no matter what,” he says.
“But that’s what he wants. He wants you to be mad so that you are then predictable. And then you are just coming forward and he can move and he can hit you. well, in my head I am strong against that.  It’s not going to happen.”
Scheinson’s keys to victory?
“Just be fast, control the ring and don’t overdo it, don’t get carried away trying to hit him,” says the Argentinian.
“He likes guys to be predictable, he does best against guys like that. But I’ll be holding the middle of the ring and just hitting him at the right times in the right places.”
GLORY 55 NEW YORK takes place July 21 at the Hulu Theater at Madison Square Garden in New York. Doumbé and Scheinson Headline the SuperFight SERIES section of the card.