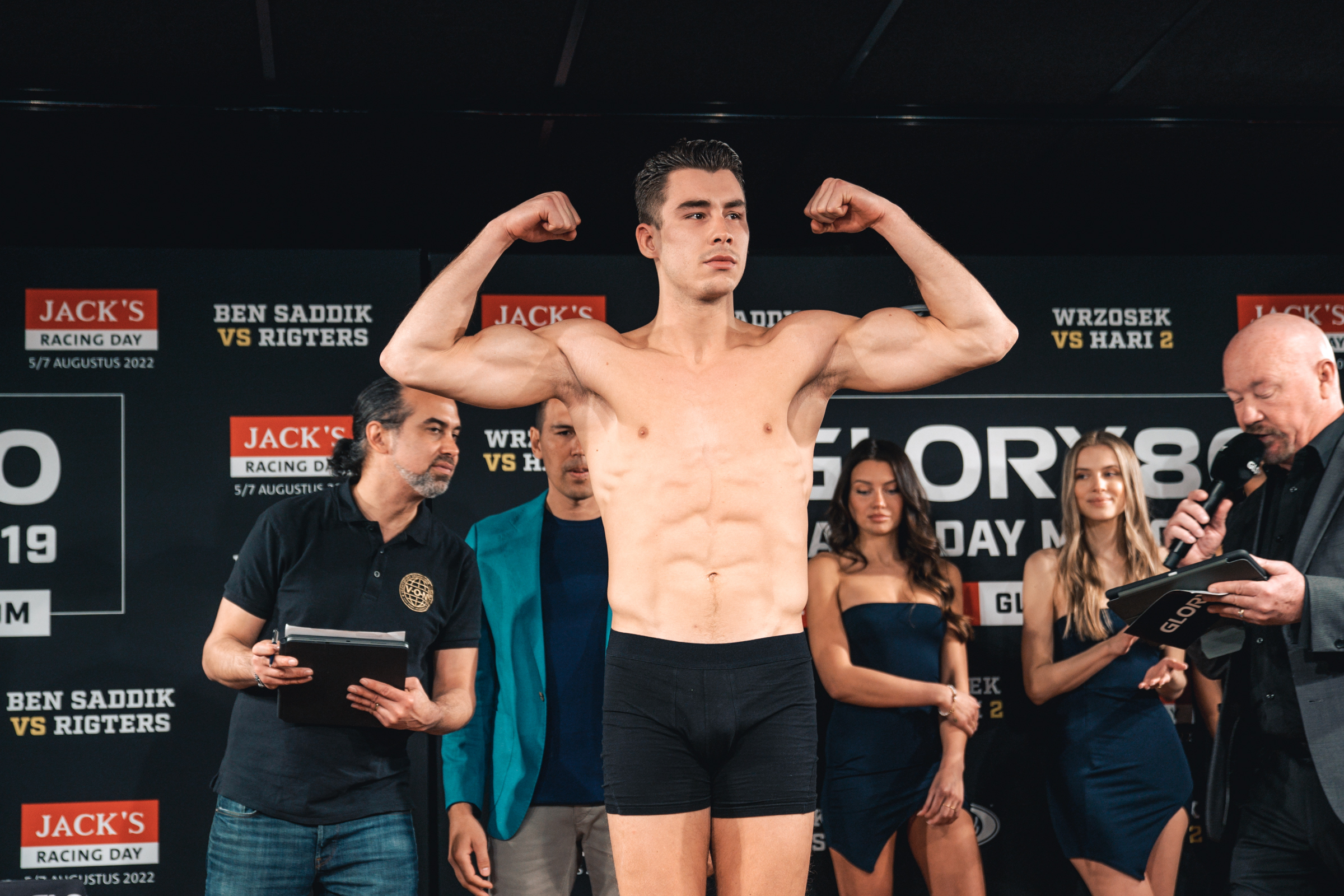 Jay Overmeer: "I consider myself a completely different fighter than the other Welterweights"

Jay Overmeer (25) made his debut at GLORY in spectacular fashion during GLORY 80. The kickboxer, who trains with Team Nibte in Amsterdam, will once again be in the GLORY ring during the first GLORY Rivals event on June 11. We spoke to him about his debut, GLORY Rivals and his opponent Rodrigo "Mineiro" Ferreira.

How did you get started in kickboxing?

I've always played tennis. Then one of my best friends took me to a kickboxing gym. I was fourteen back then. After that, I never left.

After six months, I even fought my first match. Now 11 years later and I have achieved my dream, to fight at GLORY. The next step is to fight for the GLORY belt!

Kickboxing really excited me and I thought "wow!". I’ve always looked up to the older kickboxers in the gym. I wanted to be better than those guys.

How would you describe yourself as a person?

I am an extrovert but can also be calm when necessary. Besides that, I'm not that emotional. But in the ring, I'm really a monster. Outside I am a cheerful boy and in the ring it is 'serious business.' I really come there to hurt people and show what I’m capable off.

In addition to kickboxing, I also give personal training and kickboxing lessons to the young people. I like to help people with their goals.

What is your favorite weapon in the ring?

My knees. In my last match at GLORY I gave 25 knees in the first 2 rounds alone. But especially combining multiple kicks, knees & punches. Creating beautiful actions.

Why don't you have a nickname yet?

I think someone should name you. So I'm not going to make it up for myself. That will most likely happen at some point. Maybe the fans will come up with a nice nickname!

What's the biggest difference between you and other Welterweights at GLORY?

I have a completely different style. The other guys fight very basically and they do that very well. My style is special and it's a style that no one has. Every fight of mine is a show.

The difference is that my fights are very technical instead of just punching hard like what other guys are doing. It's important to me that it looks beautiful. Kickboxing is not MMA. The techniques must be beautiful and well executed. I consider myself a completely different fighter than the other Welterweights.

What is the highlight of your career?

My debut at GLORY. Beyond doubt. The WFL championship is also definitely a highlight and my tournament wins. But now it really is the GLORY debut. My next highlight is the belt.

What went through your mind when you heard you could make your GLORY debut?

I couldn't believe it. I knew that at some point I became good enough. Then you talk to people about taking the next step and then things like COVID happen that take you a step back. But I had a dream and I believed in it, so I kept going. Then suddenly came the words 'You can fight at GLORY'. That was great news. I've been dreaming of that for 11 years.

What did you think of your GLORY debut?

Yes perfect, exactly as we trained. We knew he would be a tough guy. But that he wasn't as good as I was. The game plan worked and he lost control after the first round. Then he walked into my hook and it was over.

Are there any fights within GLORY that you're looking forward to?

Actually not, GLORY can put me against anyone and then we'll see who the better fighter is. I don't look at the name of, say, Hamicha or Semeleer. I just see it as people of flesh and blood. I'm ready for everyone. If Robbie Timmers calls me for a title shot, I will immediately say yes!

You'll fight Rodrigo "Mineiro" Ferreira on June 11 during GLORY Rivals 1. What's it like to get back into the ring so quickly?

Yes great! Then I stay in the flow and can end with a nice fight and enjoy the summer. It's also close to where I live, so it's nice for me and all my fans.

What do you think of your opponent?

Not very exciting. He comes with an unorthodox style. Crazy kciks, explosive really Brazilian. I was actually going to fight someone else, that didn't happen, so luckily GLORY quickly came up with a solution. Then we acted quickly and made another game plan.

How does a fight between you and Rodrigo "Mineiro" Ferreira end?

Spectacular! On a KO or TKO. I hope round 1 on the body.

I think it's great because everyone can fight more. The more events, the more you can fight. So I definitely think it's a good initiative.

Jay Overmeer will be back in the GLORY-ring on Saturday, June 11 against Rodrigo "Mineiro" Ferreira during GLORY Rivals 1. More information about the event can be found on the event page: https://GLORYkickboxing.com/events/GLORY-rivals-1:5e6916e4-cedd-4fb2-becd-200a4cd3ac94

Keep an eye on our social media for more information about the event.