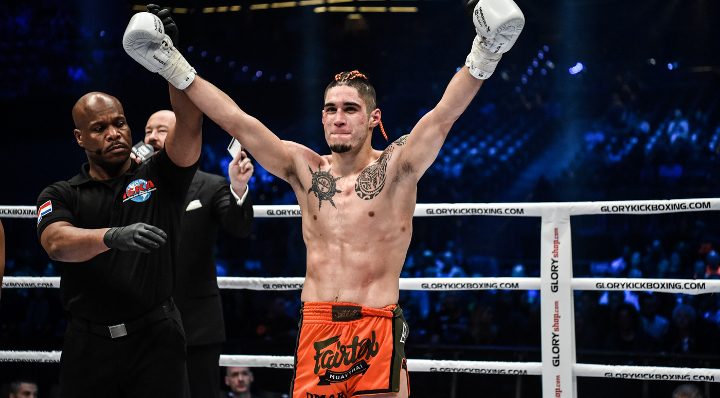 Omar Moreno and China’s Anying Wang had a three-round war on the GLORY 49 ROTTERDAM card.
The two Welterweights were making their respective GLORY debuts and keen to impress and catch the attention of fans and matchmakers.
Moreno, taller and rangier than Wang, was able to impose himself more on the fight, using his reach advantage to score with straight punches and reaching body kicks.
Wang pressed forward gamely and pulled off some impressive strikes of his own, but couldn’t get into the rhythm he needed.
Moreno edged ahead slowly but surely and ended up winning a comfortably clear unanimous decision.
Afterwards, he professed himself dissatisfied with his performance and said he has more to show.
“This is a big platform and I was nervous for my debut so yeah, I didn’t show everything I was capable of. Next time I will show more,” he said.
Moreno has an interesting back story. He was born in Chicago to Mexican nationals, but his father had been born in Spain and thus the family moved to Europe after some years. He is now resident in the Netherlands but remains a US national.
“GLORY has a card in Chicago in February and I want to get on that! That’s all my people there, I’ve got lots of friends and family in Chicago, I’d love to get on that card and represent,” he said.
Omar Moreno def. Anying Wang, Unanimous Decision (30-27, 30-27, 30-27, 30-27, 30-27)