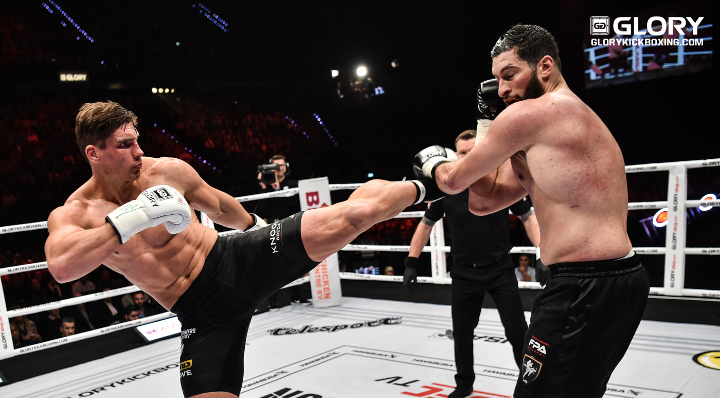 Verhoeven on verge of four new records at GLORY 54

Rico ‘The King of Kickboxing' Verhoeven is on the verge of setting four new GLORY records.
The world Heavyweight champion will face Mladen ‘The Scorpion Sting’ Brestovac (56-12-1, 35 KO’s) in the main event of GLORY 54 BIRMINGHAM on Saturday night. If he wins, he’s going to raise several bars higher than they have ever been raised before.
Verhoeven (53-10, 16 KO’s) has six title defenses to his name, a GLORY record. If he wins, he extends that ‘Most GLORY Title Defenses’ run to seven.
He will also simultaneously extend his record for ‘Longest GLORY Title Reign’: by midnight Saturday that will run to 1,442 days since he first won it by beating Daniel Ghita at GLORY 17 LOS ANGELES.
It doesn’t end there. Verhoeven holds the GLORY record for longest GLORY win streak, which will extend by one if he beats Brestovac. He’s also tied with Featherweight champion Robin van Roosmalen for ‘Most GLORY Fights’ but will take the lead - and set a record - with a win over the Croatian.
“That’s what we work for. You try to be the best, you want to be the best and thats what you train for. Taking it to next level, things that the sport hasn’t seen yet - that’s what we keep on doing,” says Verhoeven.
“I’ve got so much more experience now [since that first fight with Brestovac at GLORY 28 PARIS]. I’ve been in the biggest arenas, keep on evolving, keep getting better, keep working hard. That’s the cocktail that works. It’s nothing special - just keep putting that work in.”
Verhoeven and Brestovac first met at GLORY 28 PARIS in March 2016. Verhoeven took a unanimous decision win after five rounds of fighting and, though Verhoeven was the clear winner, many felt Brestovac gave him one of the toughest tests of his GLORY career.
Brestovac earned himself this Heavyweight title rematch by stopping Hesdy Gerges at GLORY 45 AMSTERDAM, taking the veteran campaigner out in just 37 seconds of the first round, by way of his trademark left high kick.
“The thing was, Hesdy had said he was not going to get caught with that kick, he’s a good fighter but he’s only got that high kick. So then to nearly get decapitated with that kick was crazy,” says Verhoeven.
“That’s what Brestovac brings: surprise. He is definitely top five in the division, maybe top three. He is one of the best.”
GLORY 54 BIRMINGHAM takes place Saturday, June 2 at the Genting Arena, Birmingham, England.
It airs live and free in the UK on FreeSport UK (Channel 95 / 222 Sky) and in the USA on ESPNews.