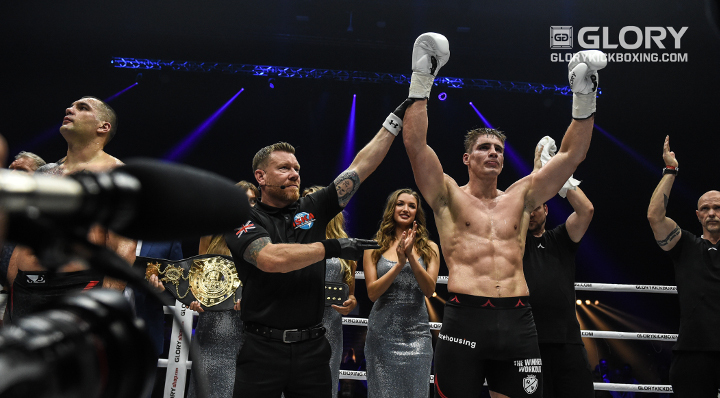 The sport’s most dominant Heavyweight returned to action in the main event of GLORY 54, as Rico “The King of Kickboxing” Verhoeven (53-10, 16 KO) put his belt on the line for a seventh time against a familiar face, Mladen “The Scorpion Sting” Brestovac (56-12-1, 35 KO).

Verhoeven previously defeated Brestovac at GLORY 28 in Paris by decision.

The 29-year-old Dutchman Verhoeven entered the fight riding a 15-fight winning streak inside the GLORY ring, while Brestovac had won five of his last six bouts, including a 36-second finish of Hesdy Gerges at GLORY 45.

Kicks were the tool of both fighters in the opening minute of the title match-up. Verhoeven stayed in tight to avoid the dangerous left high kick of Brestovac.

The champion initiated the clinch and focused on scoring with short punches from the inside. Brestovac worked the body of Verhoeven with kicks, but he did not stop the forward march of the champion.

Verhoeven immediately closed the distance to kick off the second round. He backed Brestovac into the corner and landed punches. Brestovac continued to fire kicks, but Verhoeven was able to avoid significant damage.

The champion focused his attack on the legs of Brestovac, repeatedly countering with low kicks and slowing the movement of the challenger.

Round three opened as a carbon-copy of the second frame. Verhoeven was quick to back Brestovac against the ropes and attack with punches and low kicks.

A right high kick from Verhoeven was followed with a big uppercut, but Brestovac absorbed it well. Verhoeven’s boxing began to take over in the last minute of the stanza, as Brestovac continued to be hampered by the leg kicks from earlier in the fight.

Brestovac unleashed a series of punches to start the championship rounds, but quickly found himself in the corner once again.

Verhoeven landed a push kick to the midsection of Brestovac, which gave him enough distance to deliver his patented left high kick.

The champion saw it coming and blocked it before it could do any damage. Brestovac mixed in a right high kick and a left kick to the body as Verhoeven’s output waned later in the frame. A left hook from Verhoeven connected as the bell sounded.

The champion turned up his pressure early in the fifth round, again backing Brestovac to the ropes with punches.

When the challenger tried to circle away, Verhoeven attacked with low kicks. A big flurry from Verhoeven came midway through the frame, but Brestovac’s chin held up.

A massive right hand snapped Brestovac’s head back in the final minute, followed by an uppercut.

The Croatian saw the final bell but the decision was never in doubt, as Verhoeven successfully earned his seventh title defense, further cementing himself as the sport’s premier Heavyweight.

“I expected a tough fight and that’s what he brought. I want to give Mladen a lot of props, he’s one hell of a fighter. Luckily for me, I didn’t get full power to the head,” Verhoeven said with a laugh.

“The next big thing will be Sept. 29 in my home country. I’ll be back better than ever.”