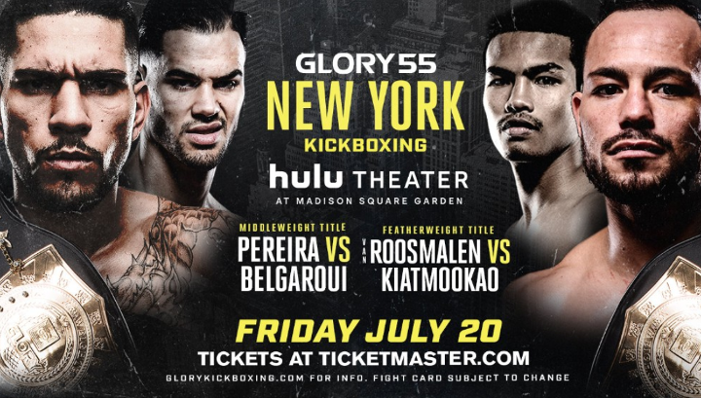 DENVER – On Friday, July 20, the world's premier stand-up combat league returns to The Hulu Theater at Madison Square Garden for an evening of fights including GLORY 55 New York, and GLORY 55 SuperFight Series.

VanNostrand, now ranked No. 3 in the Featherweight division, hails from New York and is undefeated under the lights of The Hulu Theater, racking up wins over Giga Chikadze, Anvar Boynazarov and Mo Abdurahman last year.

The five-fight card for GLORY 55 New York can be found below:

GLORY 55 New York will be carried:

Doumbé and Scheinson are ranked No. 2 and No. 9, respectively. Both competed in May at GLORY 53 SuperFight Series, where Doumbé electrified the French crowd with a 33-second knockout of Thongchai Sitsonppenong and Scheinson earned a unanimous decision against late replacement Anghel Cardos.

Lightweight Itay Gershon (15-4, 5 KO, fighting out of Israel) has earned both of his GLORY wins at The Hulu Theater, and he looks to make it three-in-a-row against Virginia's Trevor Ragin (7-3, fighting out of the United States), who competed on the GLORY 32 Virginia prelims.

The six-fight card for GLORY 55 SuperFight Series can be found below:

Tickets for GLORY 55 New York and GLORY 55 SuperFight Series are on sale now and available for purchase at ticketmaster.com or the Madison Square Garden box office.