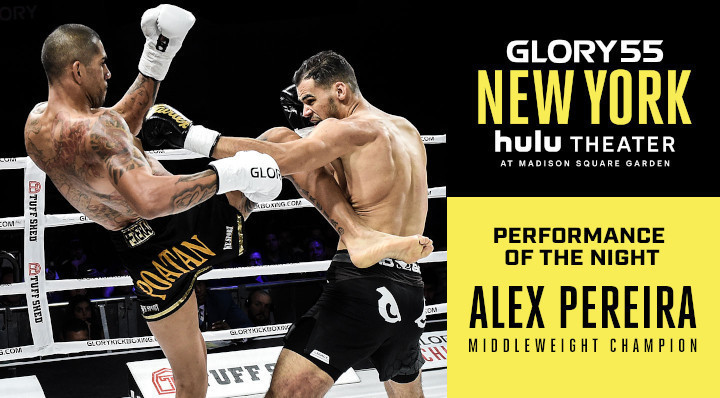 Alex Pereira has been awarded the ‘Performance of the Night’ award for his stoppage win over Yousri Belgaroui in the main event of GLORY 55 NEW YORK.
Pereira, making a second defense of his Middleweight title, stopped Belgaroui with a thunderous right hand late in the first round.
Drifting across to his left side, he triggered a right cross from Belgaroui, but knew it was coming and so was able to deploy his own counter-right which ended the fight even as he was sidestepping Belgaroui’s own effort to end the fight.
Pereira is now 4-0 in his last four GLORY outings with three of those wins by stoppage inside the distance.
His win over Belgaroui also makes him the winner of their trilogy: he lost to Belgaroui at GLORY 40 but stopped him with a cut at GLORY 49.
Pereira earns an extra $5,000 for his fight-ending efforts. The award is accorded by an internal GLORY panel.
Featherweight newcomer Asa Ten Pow narrowly missed out on scooping the award for his first-round bodyshot finish on the SuperFight Series section of the card.
GLORY’s next event takes place in Denver, Colorado next week as The Mile-High-City plays host to DENVER 56 GLORY on Friday, August 10 at the 1stBANK CENTER.