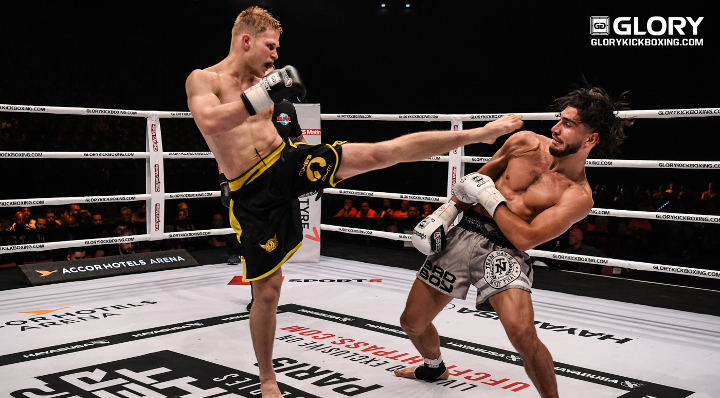 Serhii Adamchuk (35-9, 14 KO’s) is the former champion in this division and with wins over fighters like Mosab Amrani, Gabriel Varga and Marat Grigorian, he’s proven his quality many times over.
Things have been a bit harder for him since he lost the belt to Robin van Roosmalen, maybe opponents started to figure him out a bit, but he remains a very tough opponent for anyone.
He wants the belt back and so he’s going back into the tournament mix to get started on that road.
With his pedigree and experience at this level you would have to think he is the tournament favorite, but Adamchuk’s semi-final opponent has also established himself a high-level fighter.
Azize Hlali (99-16-1. 19 KO’s) started fighting at a very young age - in fact, he competed in Thailand for the first time at the age of 13! - and he’s got a lot of experience and a lot of tricks.
He came runner-up in the GLORY 47 LYON tournament last year and he’s on home soil in France again here.
Also on home soil is Victor ‘Leo’ Pinto (74-28, 23 KO’s) in the opposite semi-final bracket, although it’s not soil he sees very often.
Pinto was born in France but raised in Thailand from his infant years and hence is a lifelong Muay Thai stylist.
He’s fought in France before but this is his first GLORY fight in France and so that’s going to inspire him as he makes his way to the ring.
Opposite him is a newcomer to GLORY, a Turkish fighter by the name of Buray Bozaryilmaz.
Bozaryilmaz (38-7, 10 KO’s) has been on the radar for a while and he’s shown enough to earn himself a call-up to GLORY.
He fights with a good mixture of intelligence and aggression. We’ve had some great fighters under the Turkish flag, so I’m interested to see what he can do.
The Featherweight Contender Tournament takes place this Saturday, May 12 on the GLORY 53 LILLE SuperFight Series card, which streams live worldwide on UFC Fight Pass at 1 p.m. ET / 10 a.m. PT