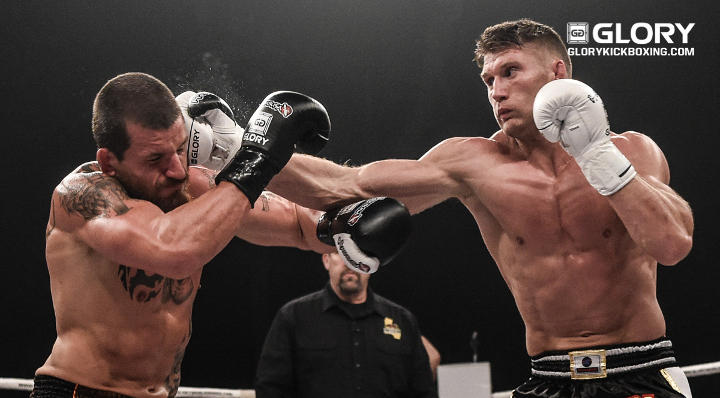 Lemaire laughs off Camozzi threat: “He can’t hurt me"

Mike Lemaire (19-5, 8 KO’s) has laughed off recent comments made by upcoming GLORY 52 LOS ANGELES opponent Chris Camozzi.
Denver-based Camozzi said he will “set a pace which hurts” Lemaire when they throw down next Saturday night.
Lemaire, fighting out of San Diego, CA, says Camozzi must be thinking of a different fighter.
“I’m the one who is going to set the pace, not him. Look at the GLORY 48 tournament and the pace I fought at for seven rounds in total,” he says.
“He can’t hurt me. He’s never fought an opponent of my caliber under kickboxing rules and he’s going to feel that next Saturday night.”
Lemaire is ranked #10 in the Middleweight division and was runner-up in the GLORY 48 Middleweight Contender Tournament.
He is 1-1 in his last two outings, 2-2 in his last four and 4-5 in GLORY overall, including a win over Camozzi’s teammate Dustin Jacoby.
Camozzi, a twenty-fight UFC veteran, joined GLORY late in 2017 and was also on the GLORY 48 card, debuting with a dominant stoppage win over Kyle Weickhardt.
He has a 24-13 record in MMA, with eight wins inside the distance. His fight with Weickhardt was actually his professional debut as a kickboxer, making him technically 1-0 with 1 KO as a kickboxer, but of course he brings a lot more experience with him than that record implies.
Lemaire and Camozzi face off on the GLORY 52 LOS ANGELES Main Card, which airs live in the US on ESPN 3 at ESPN3 at 11 p.m. ET / 8 p.m. PT on Saturday, March, 31.