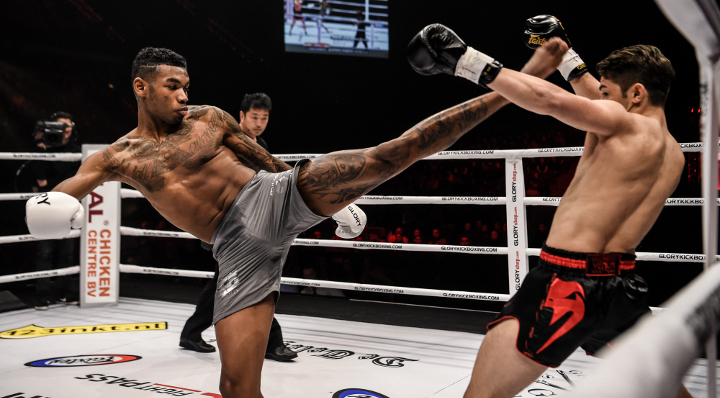 Glunder survives low blow to get back in the win column

Massaro Glunder (31-11-4, 20 KO’s) took a unanimous decision win over Victor Pinto (74-28, 23 KO’s) after a Featherweight war on the GLORY 51 ROTTERDAM SuperFight Series card.
This was a key fight for both participants: Glunder rode a three-fight losing streak into it, and Pinto was 1-1 after two fights under the GLORY banner.
A little pre-fight trash talk had been exchanged but the most controversial issue between them was weight: Glunder missed weight on the first attempt and on his second attempt was still slightly over (0.6lb / 0.3 kg), resulting in him forfeiting $1,000 of his purse to Pinto.
The pressure was on Glunder and he rose to the occasion, entering the ring determined to put on a showcase performance for himself and get back in the win column.
Fortunately for Glunder he was able to overcome a low blow which nearly ended the fight in the first round.
Glunder went for a head kick, Pinto leaned back and let the kick sail past, then countered with a hard body kick.  But with Glunder being in mid spin with his leg raised high, Pinto’s kick landed square on his cup. Glunder went tumbling across the ring then came up in agony.
Several minutes delay followed as Glunder was given time to overcome the effects of the blow. But eventually he was able to recover and get back into the fight. From that point, he went to war, going after Pinto with flurries of hard punches on the restart.
A good right hand and a good head kick effort stood out for Glunder towards the end of the first round, snapping Pinto’s head back and getting the crowd’s attention. So as soon as the second round started, he went for broke, swarming Pinto with heavy punches and looking to turn the clash into a bar-fight.
Pinto ate a couple of shots and then bit down on his mouthguad and started firing back, making for a crowd-pleasing war which had fans around the arena sending up cheers.
‘Bang it out’ was probably not the gameplan Pinto came to the ring with, being primarily a technician who looks for cleaner scoring work rather than trying to bludgeon the opponent, but he got into it and scored some nice shots of his own in the latter half of the round.
Things were pretty even going into the third round. The fight changed shape again, transitioning into a gritty war in which the two veered between spoiling each other’s scoring opportunities at close range and hammering hard shots into each other’s torsos.
Solid knee work came from both fighters but Glunder had the better of the punching exchanges and that put him up on the scorecards.
When the round ended, it was not unlikely that an extra round could be ordered by the judges, but they had seen enough to decide that Glunder was the winner, awarding him the unanimous decision win by two rounds to one.
Massaro Glunder def. Victor Pinto, Unanimous Decision (29-28, 29-28, 29-28, 29-28, 29-28)