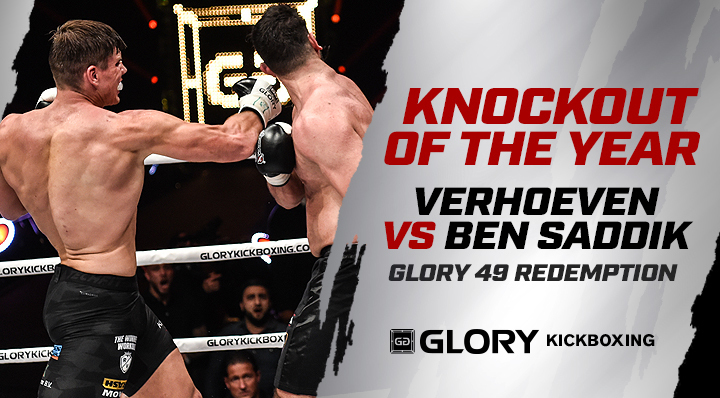 Big finishes are what GLORY Kickboxing is all about and, with the highest finish-rate of any fight sport, you’re likely to see them event after event.
So many fighters scored stoppage wins in their 2017 fights that for the first time ever, finishes by way of kicks got their own category. The rest, by way of thunderous punches and pneumatic knees, fall under this category.
Every nomination was a strong contender, but the finish which stood out for most fans came in the year-ending showdown between Rico Verhoeven and Jamal Ben Saddik.
The biggest fight of the year ended with the biggest knockout of the year as the ‘King of Kickboxing’ kept his crown.
Ben Saddik had the Heavyweight champion in trouble in the first round but Verhoeven gritted it out and came back to dominate the fight and eventually end in emphatically towards the end of the fifth round.
Also nominated:
Zinedine Hameur-Lain, for his finish of Brian Collete at GLORY 44 CHICAGO in the light-Heavyweight tournament.
Anvar Boynazarov, for his stunning knockout of Fabio Pinca in the GLORY 47 LYON Featherweight Tournament.
Kevin Vannonstrand, for his lazer accurate knee to the midsection which stopped Boynazarov at GLORY 48 NEW YORK.