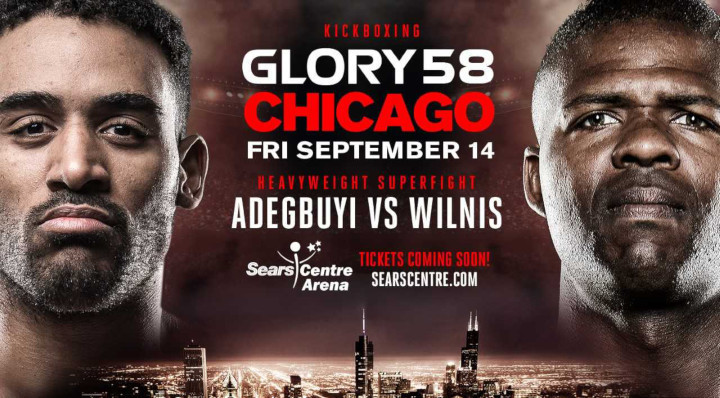 DENVER – Fans in the Chicagoland area will be getting this summer's GLORY action sooner than expected. The world's premier kickboxing league today announced that GLORY 58 Chicago will take place one day sooner than previously scheduled.

The Heavyweight division's No. 1-ranked fighter Benjamin "Mister Gentleman" Adegbuyi (30-5, 18 KO, fighting out of Romania) has fought and won three times in the Chicago area since joining GLORY, including a one-night contender tournament victory at GLORY 50 Chicago in February.

On Friday, Sept. 14, Adegbuyi returns to trade leather with hard-hitting Jahfarr Wilnis (31-9-1, 8 KO, fighting out of the Netherlands), who is ranked No. 5 after his impressive upset of Jamal Ben Saddik at GLORY 53 Lille in May.

Adegbuyi and Wilnis went toe-to-toe for three rounds at GLORY 24 Denver in 2015, resulting in a Fight of the Year nomination and a split decision win for Adegbuyi. Following their hotly contested first bout, both fighters will be looking to leave their mark on this rematch.

Additional fight card details for GLORY 58 Chicago, as well as GLORY 58 SuperFight Series and the GLORY 58 prelims, will be announced in the coming weeks.

Tickets for GLORY 58 Chicago, with prices ranging $35 - $170, go on sale to the public at 10 a.m. CT on Friday, July 20 and will be available for online purchase at searscentre.com and at the Sears Centre Arena box office.

Starting today, fans that register (or have previously registered) at GLORYkickboxing.com will have an opportunity to purchase tickets for GLORY 58 Chicago three days before tickets go on sale to the general public. The exclusive pre-sale begins Tuesday, July 17 at 10 a.m. CT. Those that register will receive an email before Tuesday's pre-sale with instructions on how to access this exclusive event.

GLORY 58 Chicago will be the promotion's Fourth event during the Summer of GLORY 2018, a five-city campaign featuring can't-miss events in New York, Denver, Shenzhen (China), Chicago and Amsterdam.