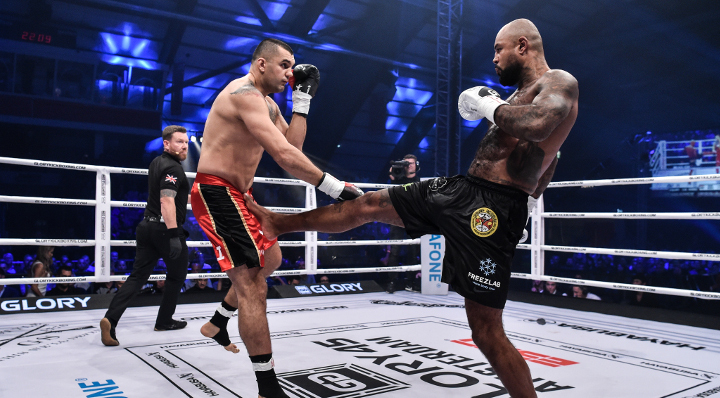 Gerges: “Me and Badr have unfinished business”

Hesdy Gerges was not surprised to hear that the pre-sale tickets for his GLORY 51 rematch with Badr Hari sold out in just two hours.
Their 2010 meeting ended in infamy when Hari attacked a downed Gerges in the second round, kicking him in the head as he attempted to regain his feet following a slip.
The fight was immediately waved off, Hari losing by disqualification and ceding his ‘It’s Showtime’ Heavyweight title in the process. Gerges has wanted a rematch ever since - and so have the fans.
“This is a big fight, big rematch. We are going to finish what we started seven years ago,” says Gerges.
“I’m really excited for this fight. I am going to enjoy every minute of training for this, then enjoy fight week, enjoy walking into the arena, enjoy the fight. Everything. We are really going to give the people a great show. This will be a big event.
“I watched [GLORY REDEMPTION] and Badr came on the screen and it was announced that he was coming back. [On the video’s voiceover] he was challenging anyone who wanted to fight him so right away I got on social media and said I wanted that fight. People picked up on it and it got bigger and bigger and then GLORY called me. And here we are now.”
The events of 2010 are seven years in the past but they are fresh in Gerges’ mind. He remembers how high the tensions between him and Hari were during fight week and during the fight itself. Their staredown in the pre-event press conference was one of the most intense in Heavyweight history.
It was a match with several undercurrents. Gerges and Hari are both Amsterdam born and raised, but from different sides of the city, so local bragging rights were on the line. Hari had at that stage also confirmed himself as the Heavyweight division’s most terrifying force. His fans expected him to finish Gerges with ease.
“I know what happened. He knows what happened. People were all talking before the fight that he would win easy and he would kick through me or whatever and he tried that and it didn’t happen and I was still right there in front of him,” says Gerges.
“And then his confidence went. He started to panic, I think. Then he decided to do what he did, because better for him the fight end like that instead of it carrying on and people seeing maybe something else happen.”
In addition, Hari was in his early years trained by Gerges’ coach Thom Harinck, prior to them having a bad falling out. There was a sense that Hari was not just fighting Gerges but also wanting to strike a blow at Harinck.
“[Badr has] has alway got to find something to motivate himself with. So that’s what all that was about. And he used to be with Thom when he was younger. Thom has seen Badr in all his weakest moments, knows his weaknesses, so that was also on his mind I think.”
Now the two are set to rematch. When they meet in the Ahoy Arena, Rotterdam on March 3, 2018, it will be almost exactly eight years from their first fight.
A lot has happened for both fighters in the interim, and yet the speed with which they both accepted the rematch suggests that they both consider it unfinished business. Nonetheless, Gerges doesn’t expect this rematch to end in the same way their first fight did.
“We’ve both had a lot of experience since then, we’ve both matured. I don’t think the same thing would happen now. But for sure it’s going to be a real war,” he says.
GLORY 51 takes place at the Ahoy Arena, Rotterdam on Saturday, March 3 and features Gerges and Hari in the Headline slot. Tickets to GLORY 51 Rotterdam are on sale now! CLICK HERE TO BUY YOUR TICKETS