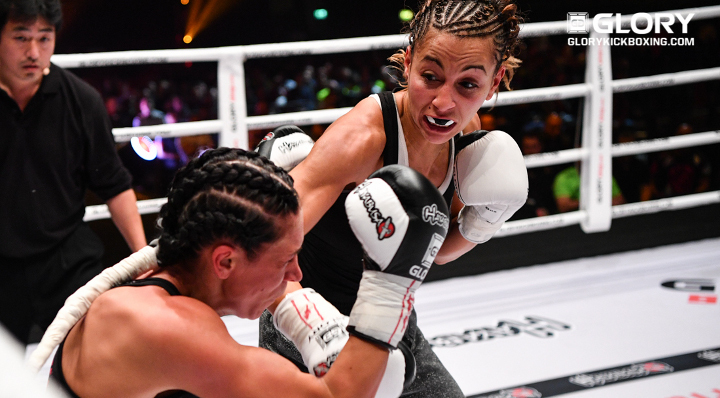 Anissa Meksen’s world-beating run will come to an end in Lille on Saturday, May 12.
That’s the message from title hopeful Amel ‘Huch Huch’ Dehby (32-1, 11 KO’s), who will be challenging Meksen (95-3, 30 KO’s) for her world super-bantamweight championship in one of the card’s key bouts.
“She’s had a very nice run so far. But our meeting will change that.” says Dehby of Meksen’s career to date.
Dehby was undefeated when she joined GLORY. She progressed through the Super-Bantamweight Grand Prix and reached the Final Four tournament at GLORY 36, where she defeated Isis Verbeek in the semi-finals.
In the final, she met California’s Tiffany van Soest. They went three close rounds before Van Soest emerged with the decision win.
The win meant she became the inaugural GLORY women’s champion and, in the process, became the first fighter to spoil Dehby’s record.
Van Soest eventually lost the belt to Meksen, who is now making her first defense of it against Dehby.
“The defeat against Tiffany was a mishap, nothing more. And I never look at what is behind me. I can just guarantee that I will be 100% present on May 12,” says Dehby.
“The title belt for me will be a reward for all my years of hard work and will recover my rightful place in the division.”
In a recent interview, Meksen declared herself to be “not impressed” by Dehby. The challenger finds herself amused by the sentiment.
“So much the better!” Dehby says. “That should allow us to make a very nice fight, there should be no holding back.”
As for Dehby’s own assessment of Meksen, and in particular any weaknesses she sees in the defending champion, that’s being kept undercover until the fight.
“No comment. This [revealing of her weaknesses] will be a surprise!” she says.
GLORY 53 LILLE takes place Saturday, May 12 in Lille, France and features a Lightweight world championship fight between Sitthichai and Tyjani Beztati plus the women’s super-bantamweight title fight between Meksen and Dehby.
The event takes place at the Zenith de Lille stadium. The SuperFight Series section of the card airs live worldwide via UFC FIGHT PASS, with the Main Card airing live in the US on ESPNews and in France on SFR.