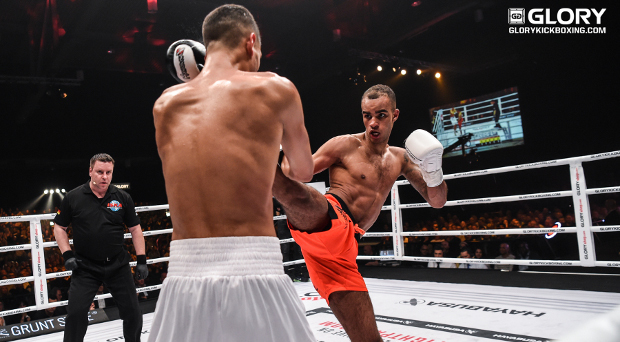 Tyjani 'The Wonderboy' Beztati proved his quality in a Lightweight showdown with Youseff Assouik, coming back from an early knockdown in the first to dominate an action-packed and dramatic three-round fight.

Assouik found himself in the bout following a win at the recent GLORY 40 COPENHAGEN event. That win secured him a spot on the GLORY roster and when Beztati needed an opponent for GLORY 41 he stepped up and took the opportunity.

It very nearly paid off for him in spectacular fashion. Around 40 seconds into the first round he backed Beztati up towards a corner and then launched a spinning heel kick to the head. Beztati read the kick coming and leaned back to let it fly past him, only for Assouik to transition into a spinning back-fist which caught Beztati clean.

Beztati went down and took a moment to recover his feet. He took an eight-count and returned to the fray, where he had to fight a frantic rearguard action as Assouik did everything in his power to try and put him away.

'The Wonderboy' hung on and managed to clear his head. They got back to exchanging blows and then, right at the end of the round, Beztati threw a flurry of punches and was rewarded when the final blow dropped Assouik for a referee's count of his own.

The scores were tied at the end of the round and that was huge for Beztati. He had managed to wipe the slate clean and now had two rounds in which to go to work and win the fight. He seized the opportunity, drawing on sharp boxing and precise kicking to score on Assouik repeatedly.

Halfway into the second round his efforts were rewarded with another knockdown, this one really seeming to take the wind out of Assouik's sails. Although the Danish fighter gamely continued the battle, Beztati had taken control and even being on the end of a particularly painful unintentional groin shot could not slow him.

Assouik gave a good account of himself but it was Beztati's night. He gave a display of power and technical skill but even more importantly he displayed strength of heart and willpower; those are the qualities that turn fighters in contenders and contenders into champions.