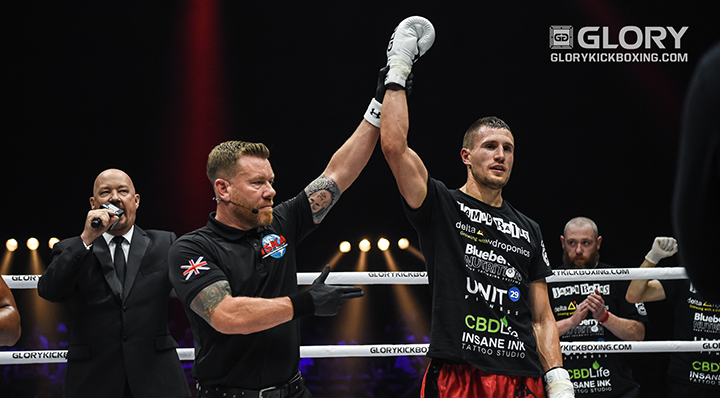 Bates back in win column after besting Hoduk

Bates threw a lead-leg kick and followed it with a series of left hooks. Hoduk looked for a spinning back kick, but Bates was wise to it and evaded any damage. The taller Bates used his foot work control the distance. Hoduk lunged forward with punches and Bates caught him with a counter shot.

A low kick from Bates caught the cup of Hoduk, but the fight was able to continue. Hoduk barreled into the pocket and clipped Bates with a left hand.

The boxing of Bates controlled the range to open round two. Hoduk continued to use forward pressure, but was caught with a left head kick coming in. Bates used a push kick to keep Hoduk on the outside. A spinning back kick by Bates found the arm of Hoduk.

Bates circled to the ropes and Hoduk delivered a heavy left straight to the British fighter. A body kick from Bates found the midsection of Hoduk late in the frame.

Hoduk was reckless with his defense in the early moments of round three. He came forward aggressively, allowing Bates to deliver a heavy head kick. Hoduk stumbled to the mat and was forced to endure a count from the referee.

Despite the knockdown, Hoduk did not stop coming forward. A spinning backfist attempt by Hoduk was met by a step-in knee from the taller Bates. A rolling thunder by Turkey’s Hoduk missed the mark and he crashed to the canvas. Hoduk pushed the pace to the final bell, but could not find a finish.

The clear-cut knockdown by Bates in round three sealed the outcome, as all five judges scored the fight in his favor.
“It’s good to be back. It was good to shake the rust off,” said Bates. “I’m my own biggest critic, so I won’t say it was the performance I was looking for, but I’m only going to get better.”

GLORY 76 Badr vs Benny Airing For Free On Pluto TV