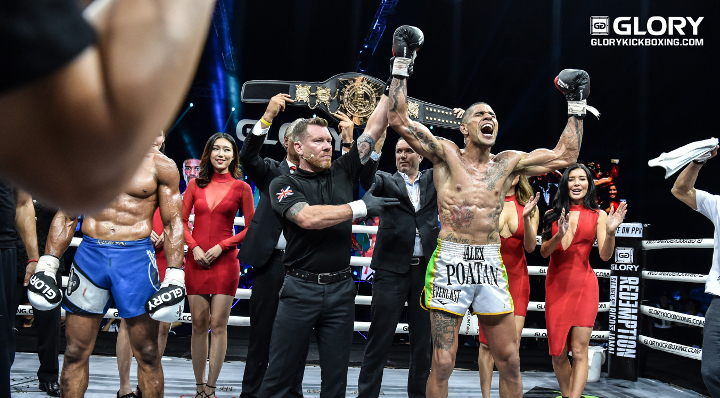 Alex ‘Po Atan’ Pereira is the new Middleweight champion of the world, having bested former champion Simon ‘The One’ Marcus over five rounds in the GLORY 46 GUANGZHOU main event.

Pereira used his reach and boxing ability to cause Marcus problems from the outset in their fight, scoring a knockdown on the way to taking a unanimous decision win.

The fight was a classic style vs. style match, as defending champion Marcus acknowledged in his pre-fight interview.

“I definitely think I am the hardest kicker in the sport, pound-for-pound,” he said, referencing his breaking of Dustin Jacoby’s arm with a body kick late last year.

Pereira, by contrast, is a noted power-puncher. The former professional boxer was described by former GLORY Middleweight champion as “probably the hardest puncher I’ve ever faced”.

Those punches caught Marcus’ attention early and seemed to disrupt his gameplan. Usually it is Marcus who obliterates opponents’ plans by way of driving savage kicks into their torso; tonight it seemed like he got a taste of his own medicine.

Pereira’s height and body structure make him a dangerous puncher; he has very long arms and is also tall enough to make a lean-back work well for him defensively, making him very hard work for a shorter opponent to face.

Marcus quickly adopted tactics of kicking Pereira and then clinching with him to shut his hands down. This didn’t draw any warning from the referee but it also didn’t win the crowd over.

Pereira’s hand work was forcing Marcus out of position defensively and that led to him opening up for a knockdown blow in the second round. He beat the count but looked vulnerable and it seemed to lead to an increase in his clinching tactics.

Halfway through the third round Marcus was bleeding from the mouth and by the fourth he looked out of ideas. The body kicks were still landing like a whip-crack but Pereira was moving through them to land hands and, increasingly, the kind of brutal knee strikes he is also capable of.

By the final round both fighters were showing signs of fatigue, looking for that one blow which would end the fight. Marcus landed some decent shots in this round but so did Pereira, and in higher amount.

When the final bell sounded, the decision was a foregone conclusion. Marcus mounted the corner to claim victory but the win was clearly Pereira’s. The judges confirmed it, all five seeing Pereira as the winner and making him the new GLORY Middleweight World Champion.